« back to curriculum home 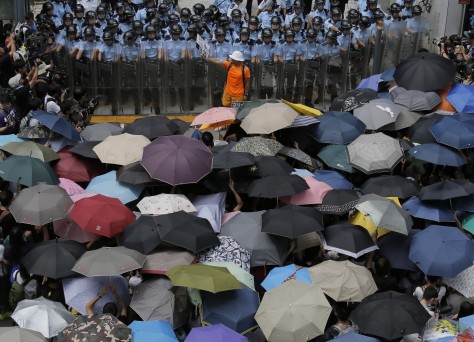 AP Photo/Vincent Yu
A protester raises a placard that reads “Occupy Central” between riot policemen and protesters outside the government headquarters in Hong Kong, Saturday, Sept. 27, 2014. Widespread protests in Hong Kong reacting to China’s refusal to allow genuine democratic reforms in the semiautonomous region became known as “The Umbrella Revolution.”

Over the past century an unprecedented transformation in the condition of world freedom has taken place. In 1900, there were no true democracies among sovereign states. Even those societies that chose their leaders through elections fell short of the standards by which a free people are judged. Thus, for example, in the United States women were denied the vote and blacks were victims of pervasive discrimination both in law and in practice.

The world has become a different place since then. By the year 2000, according to Freedom House, citizens in 45 percent of the worldâ€™s countries enjoyed a range of freedoms, including honest elections, the right to express dissenting opinions, a strong rule of law, economic liberties, and equal rights for women. By contrast, the citizens of about 25 percent of the worldâ€™s sovereign states lived under outright oppression, with fraudulent elections, censorship, imprisonment of dissidents, widespread corruption, and an unjust legal system.

Freedomâ€™s progress did not occur along a consistent pattern, but in three major waves. The first, in the period before and immediately after World War I, saw the expansion of elections in Europe and major gains for womenâ€™s suffrage. The second took place immediately after World War II, when, in reaction to the rise of totalitarian dictatorship, societies in Western Europe, North America, and elsewhere established systems of government that included both elections and civil liberties and colonial territories in Asia, Africa, and the Middle East gained independence.

The third, and most substantial, wave took place in the final decades of the twentieth century. From Western Europe to Latin America to Asia and Africa, societies that had been ruled by military governments or dictators made the choice for democracy. During the same period, the worldâ€™s most enduring totalitarian movement, Communism, collapsed almost completely, and many of the liberated societies opted for democracy and free institutions.

These changes have meant that people in societies throughout the world no longer think of themselves as subjects, but rather as citizens with an array of rights. The process that has transformed the worldâ€™s concepts of rights and freedoms has been propelled by writers and theorists, ranging from Adam Smith to the American Founding Fathers to more contemporary figures like George Orwell. The momentum toward freedom also reflected the reaction to the crimes of the Nazis. The Universal Declaration of Human Rights, and a number of other agreements enshrining various freedoms in international law, have been adopted by many nations in subsequent years. More important has been the emergence of a vigorous global civil society that has pressed forward the goals of securing individual rights.

Since 2000, freedom has faced growing pressures from a variety of sources. Notable declines have taken place in Eurasia (Russia and neighboring countries), Africa, and the Middle East. China, which many hoped would move toward free institutions, has retained an authoritarian political system and committed widespread violations of rights. In the Middle East, gains that resulted from the Arab Spring in 2011 have been seriously eroded. While Africa has shown some democratic improvements, it has experienced a series of coups and outbreaks of terrorism.

Some declines in freedom have been limited. Some countries are plagued by corruption even as other democratic institutions are strong. But in many states, major retreats from democracy are taking place. Press freedom is under extreme pressure, even as Internet usage becomes near-universal. Leaders with dictatorial ambitions create sophisticated methods to rig elections. Judicial decisions are determined by political factors, not the law. Although most countries that moved from dictatorship to democracy remain free societies, some have moved in an authoritarian direction.

Nevertheless, we can count as a major achievement the fact that there are few societies today in which the individual lives under conditions of absolute dictatorship or totalitarian rule. In few societies does the state restrict the rights of individuals to move about the country or travel abroad. Governments differ widely in the degree to which they intervene in economic matters, but very few maintain the level of domination that marked the Soviet Union.

Today, people around the world are better educated and more aware of their rights than ever before. They communicate with like-minded advocates in other societies through the Internet. They are inspired by successful movements in other societies.

Some are motivated by pervasive injustice inflicted by an uncaring leadership and brutal police tactics. Some are pushed into action by widespread corruptionâ€”the notion that their leaders are â€śthieves and bandits.â€ť Some seek narrow goals such as the protection of a forest endangered by development or the right to religious worship without the interference of the state.

While the immediate goals may differ from one society to another, the solution invariably lies in the attainment of the core institutions of democracy: freedom of speech and protest, the rule of law to protect these rights, and honest elections that enable citizens to choose leaders who will chart a new direction for their people.

Arch Puddington is vice president of research at Freedom House. –